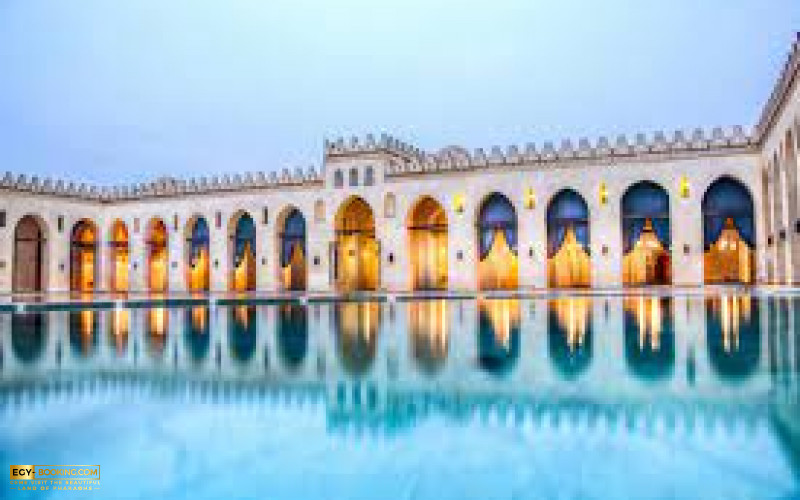 It is the fourth oldest surviving mosque in Egypt, and the second largest mosque in Cairo after Ibn Tulun Mosque. It is a mosque that the French campaign took as the headquarters of its soldiers, and its minarets were used as watchtowers, and it is qiblah's canopy was used as the first Islamic museum in Cairo, which was called the House of Arab Antiquities. It is the Mosque of Al-Hakim bi-Amr Allah, located at the end of Al-Muizz Li-Din Allah Al-Fatimi Street, next to Bab Al-Futuh.

Al-Hakim Mosque was established by the command of the Caliph “Al-Aziz Billah Al-Fatimi” in the year 380 AH, but he died before its completion, so his son Al-Hakim bi amr alah completed it in 403 AH, so that its construction took 14 years. It was built on an area of 16,200 square meters. Its length is about 120.5 meters, while its width is 113 meters. The main entrance to the prominent mosque on the western facade is considered the oldest example of the prominent entrances in Egypt.

The courtyard of the mosque, with a basin for ablution in the middle, is one of the largest in Egyptian mosques, with an area of 5,330 square meters. It is a bowl covered with white marble, surrounded by marble columns. We find that there are four porticos, the largest of which is the northern portico. The mosque also contains two mihrabs and a wooden minbar, and three domes that are characterized by the characteristics of Fatimid architecture, as well as other domes at the entrance to the mosque overlooking Al-Mu’izz Street. It also has two minarets surrounded by two pyramid-shaped bases, each base is composed of two cubes that top one another, and the upper cube is placed slightly back above the lower one, and an octagonal minaret protrudes from each of the cubes.

The mosque is characterized by its many decorations and various calligraphy, such as the Kufic script in which the verses are written, in addition to that it is replete with balconies and altars.

It is reported that the mosque underwent several restoration projects, the first of which was during the Mamluk era by Rukn al-Din Baybars, and the last was carried out by the Ministry of Antiquities.