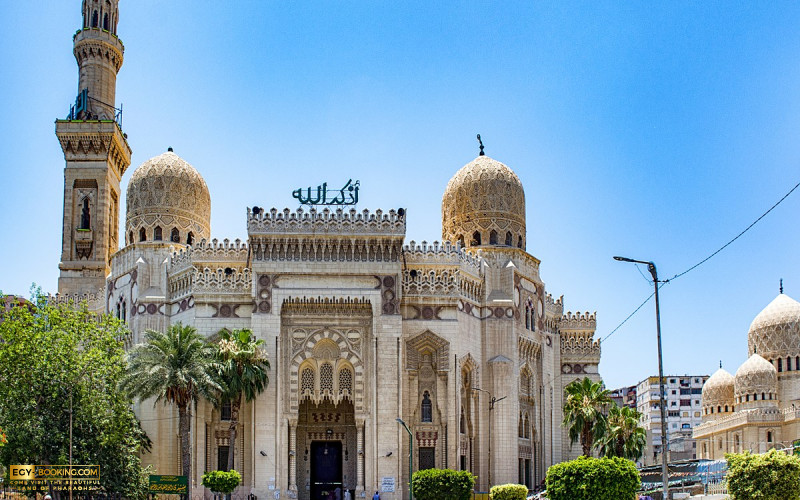 In the Bahri area in Alexandria Governorate, there is one of the oldest and most famous ancient mosques to which everyone from all over the world flocks, which is the “Mursi Abu al-Abbas” mosque, also known as “Abu al-Abbas al-Mursi”, which is attributed to Imam Shihab al-Din Abu al-Abbas Ahmed bin Hassan bin Ali Al-Khazraji Al-Ansari Al-Mursi.

The story of the Mursi Abu al-Abbas Mosque is that when Imam al-Mursi Abu al-Abbas died in the year 686 AH, he was buried in the Bab al-Bahr cemetery, a cemetery in which the saints are buried. In the year 706 AH, a building was built on his burial in order to distinguish it from the rest of the graves around it. The building became a shrine and then a small mosque built by Zain Al-Din Al-Qattan. In the year 1189 AH, the mosque was reconstructed, restored and expanded. After that, many renovations took place on the mosque, the last of them was in 1943 AD, when the mosque was rebuilt and decorated by the Italian engineer "Mario Rossi".

The mosque was opened in 1945 AD, and it took 18 years to build. It has an area of 3000 square meters. With regard to its design, it was built in the Andalusian style, and the most important characteristic of it is the decoration of the Arab and Andalusian style, its towering minaret, and its four domes. It takes the form of hanging mosques, as it rises from the ground, due to the presence of the tombs and shrines of the saints below. We find that the floors of the mosque are made of white marble, the lower part of the walls is covered with mosaics, and the upper part is covered with artificial stone. The ceilings of the mosque were engraved with Arabic motifs, while the mosque’s doors, pulpit, and windows were made of teak, lemon and walnut wood with interlacing and delicately crafted ornaments. And for its columns, they are 16 columns of granite stone, and each column consists of one piece with its base and its crown.