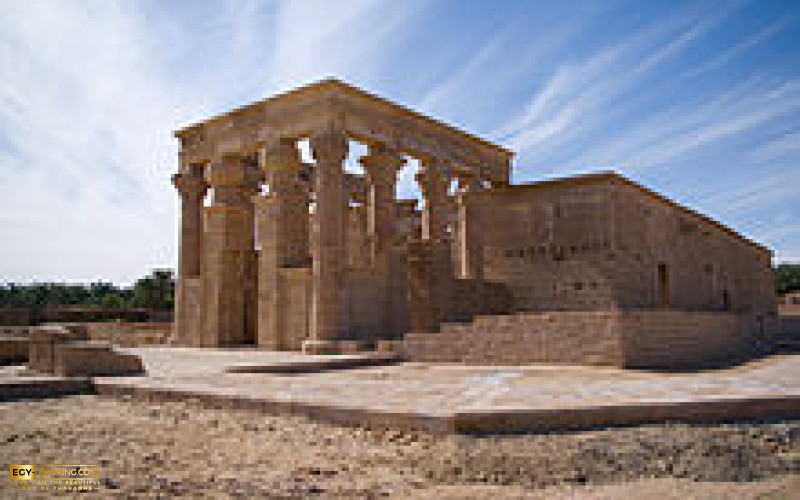 Visiting archaeological sites is no less fun than discovering them. One of these places is the Temple of Hibis, located 3 km north of the New Valley Governorate.

When you visit it or even read about it, you will realize that before the temple was dedicated to the worship of the general trinity "Isis, Osiris and Horus", it was dedicated for decades to the worship of the holy Theban Trinity "Amon, Mut and Khonsu", and it was also dedicated to some foreign deities such as the Syrian goddess "Ashtart" Which was worshiped in Egypt in one of the historical eras. And it is the oldest and largest building in the Western Desert. And it represents four historical eras: Pharaonic, Persian, Ptolemaic, and Roman. And it is the only surviving temple from the Sawy Persian era from the reign of the two kings Psamtik II, Wai Ib Ra. You will also know that it was built during the reign of the Persian King Dara I on the remains of an ancient temple likely dating back to the Middle Ages, on an area of about 798 square meters. And that it was built of sandstone on a relatively high point from the ground, in order to realize its importance as a sacred place and a center for worshiping God.

And for its composition, the marina is the first thing you will see when you visit the Temple of Hibis, followed by the Roman Gate, then the Road of Rams, then the Ptolemaic Gate, then the Persian Gate, followed by a cabin dating back to the 30th Dynasty, then the pillared hall, followed by the transverse hall, through which we reach the The Hall of the Holy of Holies, which is the most important and oldest part of the temple, as it includes 596 figures of deities that are depictions of all the deities depicted within the Holy of Holies of Egypt's temples. The Temple of Hibis includes a unique set of scenes and engraved paintings, the most famous of which is the inscription on the western wall, which represents the god Set as he kills the serpent Apophis, "a symbol of evil", and stabs him in the head.