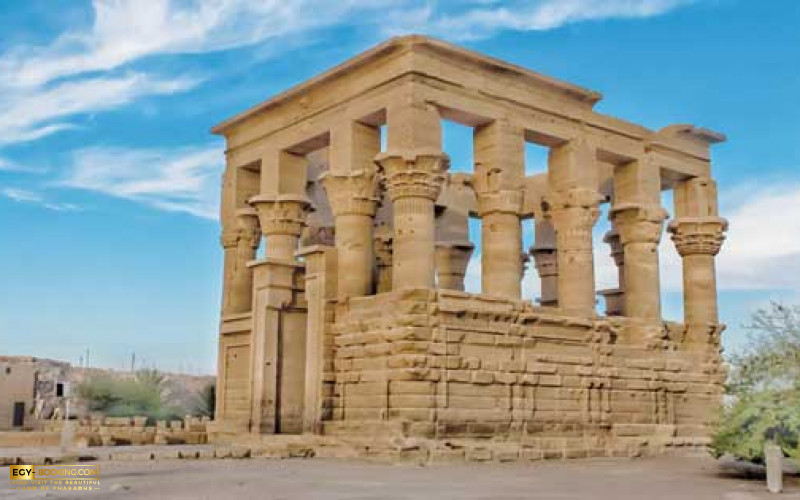 Today we will shed light on one of the ancient temples of Aswan Governorate. A temple that was not completed, as part of it was built during the reign of both Ptolemy III and Ptolemy IV in order to worship the god Isis and the Aswan Trinity. It is the main temple on the island of Philae, occupying a quarter of its area. It is the temple of "Isis", located on the eastern bank of the Aswan Governorate, next to the eastern fence of the city.

The temple of Isis was found in 1871 AD. And for the temple, we find that it has two entrances on the western facade. The main entrance is located in the middle of the facade, and is decorated with colorful scenes and texts. It is surmounted by a winged sun disk in the middle, and leads to a transverse hall containing three rooms. In the eastern wall of the middle room is the Holy of Holies. This hall includes three granite altars, two of which are located in the northern aisle of the hall, and one in the southern aisle, as well as another altar in the Chamber of the Holy of Holies, all bearing the titles of King Ptolemy IV. And for the other entrance to the temple, we find it on the far left of the main entrance. On the back wall of the main hall of the temple, we notice scenes of the king making offerings to the Aswan Trinity, "Satt, Anak, and Khnum". As we walk through the temple precincts, our eyes fall on the remains of Roman and Islamic dwellings of mud bricks, which suggests that the site has been constantly reused over the centuries. Because of the presence of crosses on the columns, altars, and inscriptions in the various rooms, as well as the scenes on the outer wall of the place, it is likely that the temple was inhabited by a group of priests in the sixth century AD.

It is worth noting that restoration and development operations were carried out in the temple, and it has been opened to receive visitors since January 2021. Among these restorations, determining the path of the visit from the entrance gate to the end of the temple, and installing a modern lighting system in order to highlight the aesthetic aspects of the temple's landmarks.