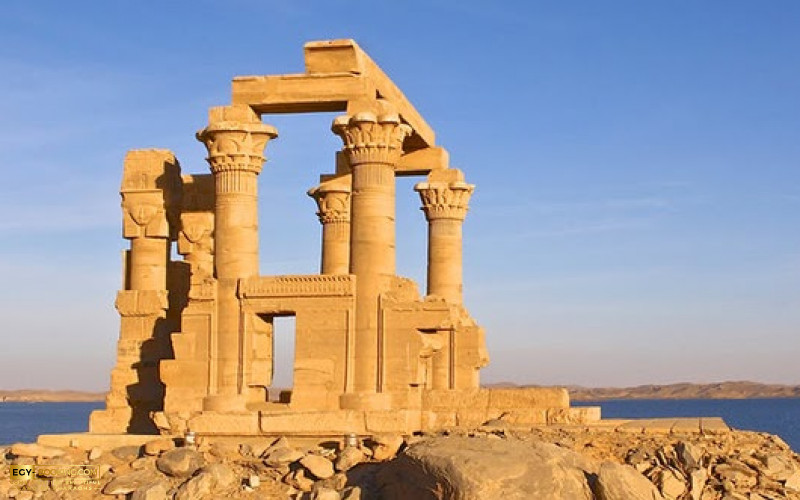 It is the second largest Nuba temple after Abu Simbel, one of the largest sandstone temples in Nubia, and the most complete in terms of its architectural elements. It was dedicated to the worship of the god "Mandulis", the sun god of the Nubians. Converted to a church during the Coptic era. Its walls bear inscriptions of the eternal legend that tells the story of Isis and Osiris. The Chamber of the Holy of Holies in which it is located witnesses the phenomenon of the sun’s curvature twice during the year, on February 14 and October 29. It is the temple of "Kalabsha" in Aswan Governorate.

A temple that dates back to the reign of the Roman Emperor Octavius Augustus, and Emperor Caligula and Trajan participated in its construction. The facade of the temple consists of a edifice with an entrance in the middle leading to a front courtyard, and the courtyard leads to the “Columns” hall. Behind this hall, there are two corridors leading to the Holy of Holies. In the southwestern part of the temple, there is the Mamizi, which was dedicated to the worship of the goddess "Isis." To the north of the temple, we find a shrine built during the reign of King Ptolemy IX. The Kalabsha Temple also contains two important historical monuments inscribed in the Greek language, one of them dates back to the year 249 AD, and was engraved on the facade of the pillared hall, and relates to the Roman governor’s decision to prevent pig farming in the temple precincts. And for the second, it documents the victory of the Nubian King "Selko" over the Blemmys tribe in the sixth century AD.

It is reported that after the construction of the High Dam, the temple was moved from its original location, with the support of the German government, to a high rocky area behind the High Dam, and the transfer process continued for two full years.