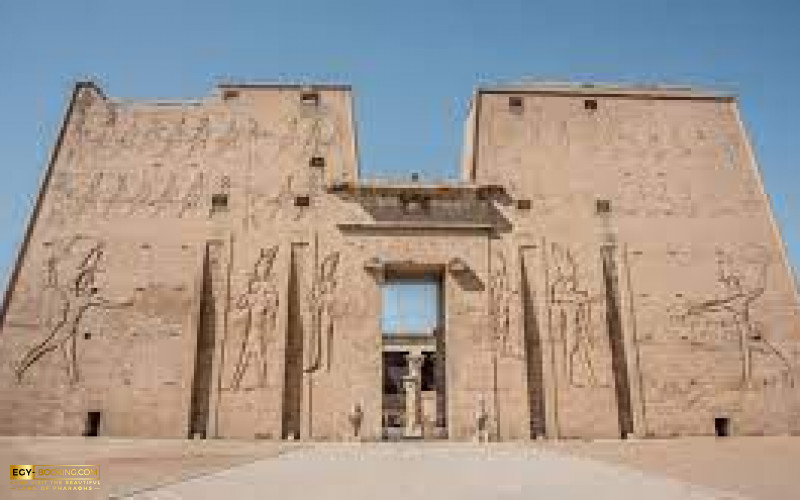 If you intend to visit Aswan soon, add to your list of tourist destinations one of the most beautiful and luxurious Egyptian temples, the "Edfu" temple, located on the west bank of the Nile in Edfu, which has been witnessing sound and light shows since 2010 AD.

Also known as the Temple of Horus, it was discovered by the French archaeologist "Auguste Mariette" in 1860 AD. Its construction took 180 years, as its construction began in 237 BC during the reign of King Ptolemy III, to be completed in 57 BC.

More specifically, the main entrance to the temple is the grand gate made of Lebanese cedar wood and inlaid with gold and bronze. It consists of a huge edifice, 36 meters high and 80 meters wide, and in front of it stand two large falcons symbolizing the god Horus, made of granite. It has been engraved with drawings depicting the king striking his enemies in front of the god Horus, and in the edifice are gaps where flagpoles were placed to flutter the front of the temple. There is also a spacious paved courtyard surrounded by two rows of columns on three sides, and on its walls there are inscriptions and drawings documenting the beautiful/good meeting between Horus and his wife Hathor.

And for what is in the temple of Edfu, there is the Nilometer, which was used to determine land rent and taxes. The catacombs of the Holy of Holies, which are a group of secret rooms dedicated to the worship of the gods, in which some of the various rituals that make the gods grant them blessing and happiness were held. This is in addition to containing two halls for columns.