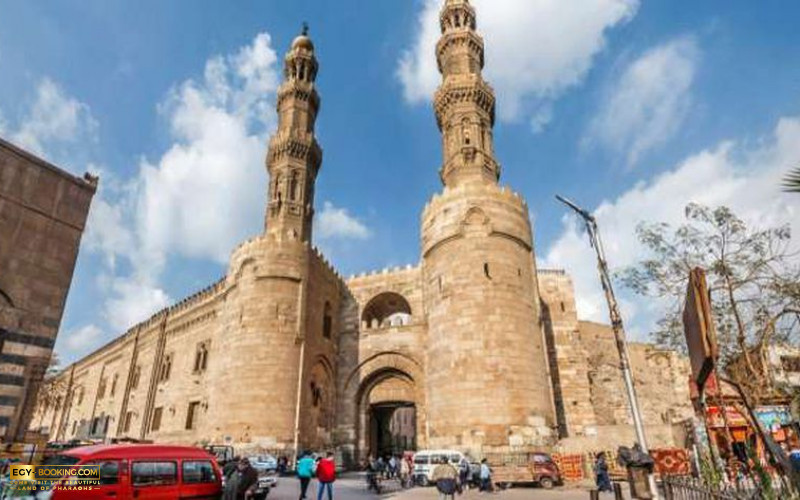 Today’s talk will take us to the only surviving gate from the southern wall of the Fatimid city of Cairo. This gate is one of the most important monuments in Fatimid Cairo, distinguished by the two minarets of the Al-Mu’ayyad Sheikh Mosque above its towers. It was one of the defensive forts of the city of Cairo, in addition to being the entrance to the historic street, "Al-Muizz Li-Din Allah Al-Fatimi". It is "Gate/Bab Zuweila", also known as "Bab al-Metwally".

A door built of stone by the emir of the armies "Badr al-Din al-Jamali", during the reign of the Fatimid Caliph al-Mustansir Billah in 485 AH / 1092 AD, after the brick walls built by the Fatimid commander, "Jawhar al-Siqali", were worn out. The door consists of a huge building block, 25.72 meters wide, 25 meters deep, and 24 meters higher than the original street level. It also consists of two round towers, in the upper third of each a defensive room for soldiers, and a wooden gate weighing four tons is closed with bronze. Bab Zuweila contains openings known as "ratchets", through which boiling oil was poured on enemies during the war. It has been decorated with the art of relief and bas-relief carving on the stone, there is the rectangular entrance on the two fronts of the gate, in addition to the lobed and conch-shaped entrances.

If we touch on the reason for its name, we will find that it was named Zuwaila because it is the gate that leads the caravans to the west towards the Libyan city of Zuwaila, or perhaps in relation to the Zuweila tribe, one of the Moroccan Berber tribes that came to Egypt with Jawhar al-Siqilli. It was called "Bab al-Metwally" because at its entrance was the person responsible for collecting the entry tax for Cairo.