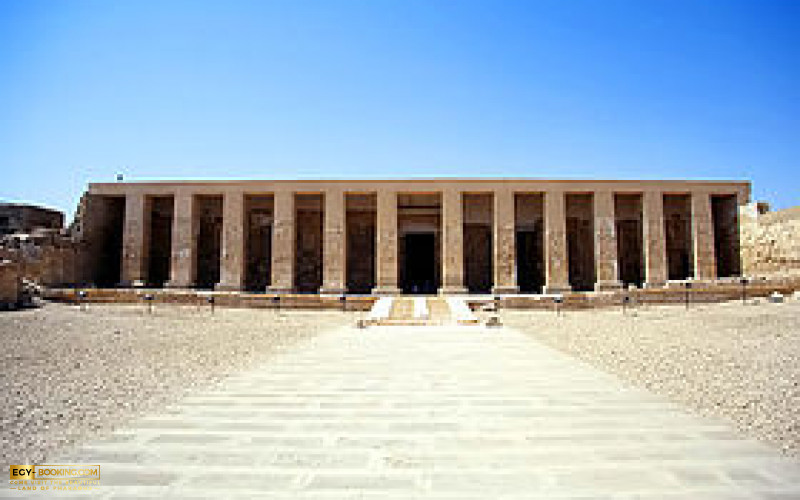 Our beloved Egypt is full of a large number of the most beautiful and most important archaeological temples, which are visited by many from all over the world. One of these temples is the "Abydos" temple, which is located in the Balina Center in Sohag Governorate.

A temple built in honor of the god Osiris, built by the Egyptian King Seti I, and completed by his son Ramses II, adding to it another temple, the Osirion temple, which is located a few meters away from it. The temple was designed in the form of a right angle, or the Latin letter "L".

The temple still retains its original roof, which rests on 36 granite columns. The temple of Abydos consists of seven chapels, and two colonnaded halls. The first was built by Seti I, and was decorated during the reign of Ramses II. Its length is about 55 meters, its width is about 11 meters, and its roof rests on 24 columns. These columns are formed from below in the form of papyrus bundles, while the crowns take the form of a flower that has not yet opened. And for the second castle, its roof is supported by 36 columns, and it is divided into three rows, each row has 12 columns, between them there are seven corridors connected to each other in both halls, and ending with seven sacred niches.

It is reported that inside the temple is one of the important inscriptions in the history of the pharaohs, which is represented in the "Godmother's List", which is known as the "Abydos List", which includes the names of 76 kings of Egypt, whom Seti I considered the legitimate kings of the country. The list begins with King Mina, and ends with King City.