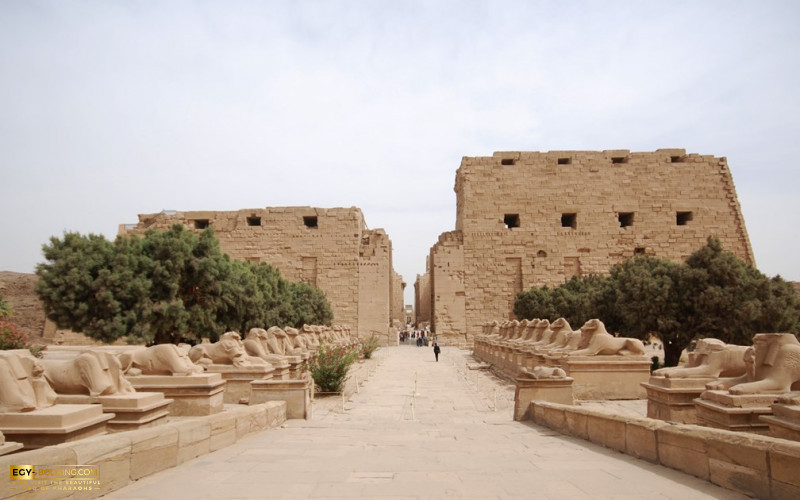 Its total area is about 247 acres, and it is the largest religious building ever built, and it witnesses on the twenty-first of December of every year the phenomenon of the sun perpendicular from six to eight in the morning, and sound and light shows are held in it.

It is the complex of Karnak temples, located west of Thebes, about 3 km north of Luxor Temple. It can be described as a group of temples and other architectural elements such as obelisks, chapels, halls and statues, whose construction was started from the Pharaonic era until the Roman era for a period of up to about 2,000 years. It was co-created by the kings of ancient Egypt, such as "Tutankhamun", "I", "Horemeb", "Siti I", and others. It was originally built for the divine trinity Amun, his wife Mut, and their son Khunus, as each of them has a temple belonging to the complex.

It was initially known as "Bar Amun", meaning a temple or the house of Amun, and some other names were also attached to it, such as: Nesut - Toa, meaning the throne of the two states, and Ipet Sot, meaning the chosen spot for the thrones of Amun, and his name in ancient Egyptian "Amon Ra Segem Naht, meaning the god Amun responds to supplications and accepts prayers. It was called Karnak, according to the city of Karnak, a modern name that was drawn from the Arabic word "Khornaq", meaning the fortified village.

And for its main parts, they are: The Way of the Rams, the Holy of Holies, the Hall of Columns, the Holy Lake, the Open Museum, the Garden of Amun, the Obelisk of Queen Hatshepsut, the Temple of Amun-Ra, the Temple of Ramses II, as well as the temples of Mut, Ibet, and Montu