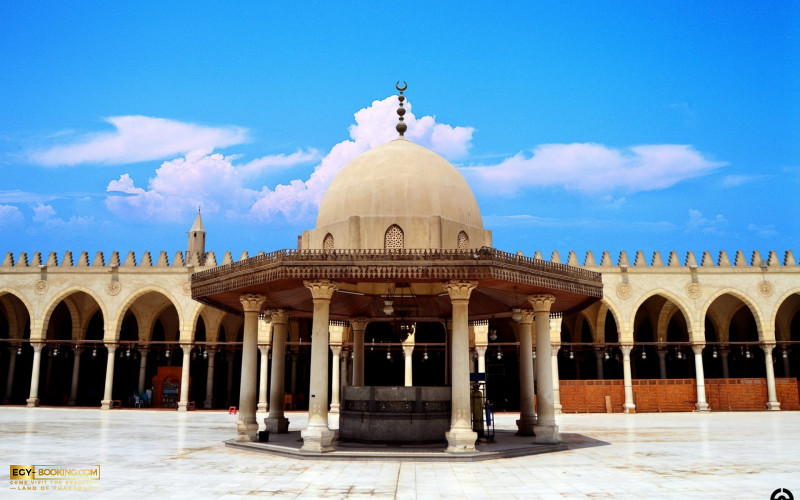 Our beloved Egypt is full of a number of ancient mosques that many people come to visit, and one of these mosques is the first mosque built in Egypt, and the second oldest mosque after the Sadat Quraish Mosque in the Eastern Province. It is the mosque of Amr ibn al-Aas, which is located in the Old Cairo district of Fustat, known as the "Ancient Mosque" and the "Taj of Mosques".

It was established by Amr ibn al-Aas in the year 21 AH after his conquest of Egypt. And if we refer to some of the history of this mosque, we will find that it experienced 13 centuries of changes, and that a court was held to resolve religious and civil disputes, and money was collected for the poor and orphans in it. We also note that there were corners in which lessons circles were held to guide the public to what would benefit them in their religious and worldly affairs, and in these circles, schools of thought such as Shafi’i, Maliki and Hanafi were taught.

During various Islamic eras and until our time, several modifications and additions were made to the mosque until it reached its current form. We find that its facades are currently crowned from the outside by the highest serrated pyramidal balconies, and it consists of an exposed middle nave surrounded by four porticos with simple wooden ceilings, the largest of them is the qibla portico. At the chest of the qibla hallway are two hollow chapels, each of them is adjoined by a wooden pulpit. In the northern corner of the portico, we find a mausoleum dome dating back to Abdullah bin Amr bin Al-Aas. Then we come to the courtyard of the mosque, in the middle of which is a dome on eight round marble columns. The windows of the mosque were decorated with stucco decorations, which are still found in the southern wall. And for the arches of the mosque in the qibla hallway, they are based on marble columns with different capitals that were brought from ancient buildings.