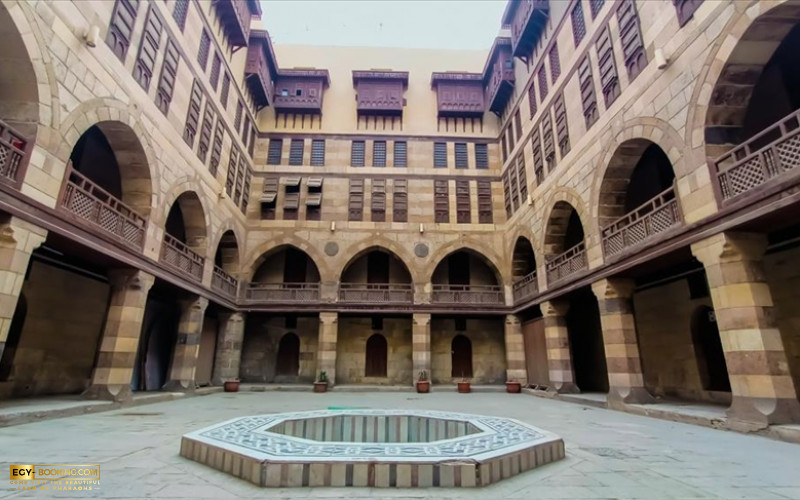 Al-Muizz Street contains many of the most impressive monuments, and one of these monuments is the architectural complex of Sultan Al-Ashraf Al-Ghouri. It is an archaeological architectural group built in the Islamic style, and it dates back to the late Mamluk Circassian era, and was established by order of Sultan Al-Ashraf Abu Al-Nasr Qansuh Al-Ghouri during the period from 909 to 910 AH. This group includes a mosque, a school, a dome, an agency, a bathroom, a house, a seat, an avenue, kuttab and a khanqah of the Sufis.

Since the Al-Ghouri Mosque is the most important in this group, let's talk about it in more detail. The mosque consists of an open courtyard of almost square shape, perpendicular to it and surrounded by four iwans on its four sides, the largest of them is the qibla iwan. The courtyard is surrounded by rows of gilded wooden pendants, and the walls of the four iwans are surrounded by a colored marble skirt that ends at the top with a marble strip inscribed in kufic script with Quranic verses and the date of construction of the mosque. In the middle of the qiblah is a mihrab made of colored marble, and next to it is a finely crafted wooden minbar. The mosque has three facades, the most important of them is the eastern facade crowned with balconies decorated with ornaments carved in stone. And for the minaret, which is considered one of the most magnificent and most beautiful minarets in the Islamic world, it is located at the southeastern end of the mosque. It is huge and square in shape, and has three stations, between each station and another a formation of magnificent muqarnas, and the minaret ends from the top with 5 pear-shaped, each of them has a copper crescent at the top.