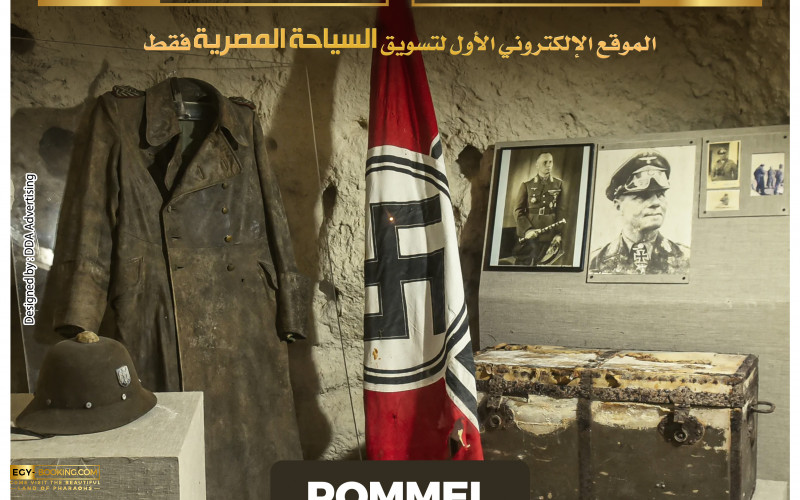 Your visit to him is nothing but a unique experience, one that will take you back in time to the time of World War II! By our words, we mean the Rommel Cave Museum, located on the Rommel Peninsula in Marsa Matruh.

A cave dug in the interior of the mountain, in the form of an arch, with an entrance and an exit at both ends at the cliff overlooking Rommel Beach. Its history dates back to the Greco-Roman era, when the ancient Romans used it to store grain in order to export it to the Roman states. It was also used to supply ships with supplies needed for its location near the sea. During the World War, it was taken by German General "Erwin Rommel" as the headquarters and the development of war plans. The year 1977 was the year in which the idea of converting the cave into a museum as a tourist and archaeological site arose. In the nineties of the twentieth century, it was annexed to the Supreme Council of Antiquities, and after a period of time, it was restored and developed until it was opened to visitors in 2017.

For the museum display scenario, it includes four glass showcases. The first includes Rommel's personal belongings, such as: the military coat and cap, the sunglasses he used in the war, and two pistols. In the second we find pictures of Rommel and his famous wand. While the third contains war maps that record the most important battles of Tobruk, El Alamein, Salloum, and the Battle of Al-Ghazala, and on it, there are the movements of aircraft and air defenses. And for the fourth, it displays a number of soldiers' rest records, their monthly vacation dates, and their medical records. We add to this that near the end of the cave, there are a group of weapons that were used in World War II, most notably: the Morris rifle.