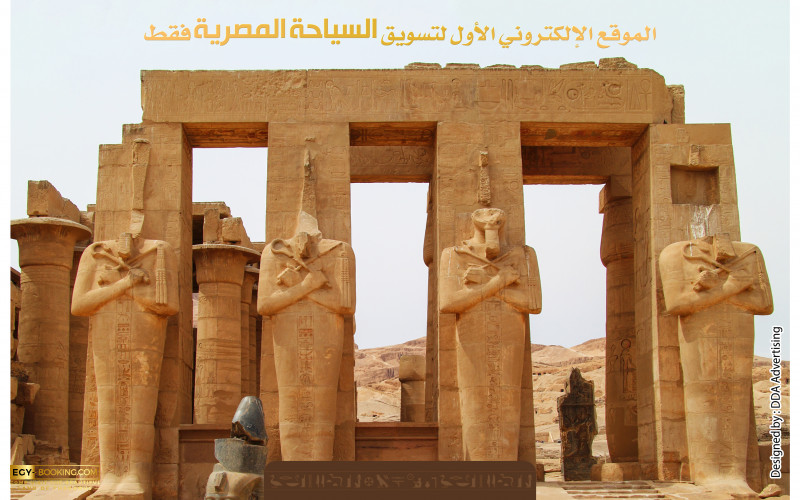 The Greeks called it "Mmnonium", and the reason may be the similarity of the huge statue of Ramses II erected inside it with the legendary hero "Memnon bin Tithonus", and he was known in the ancient Egyptian language as "Khment Waste", meaning united with Waste, and Waste here refers to the province of Al-Aqqa. At the present time, it is known as the "Temple of the Ramesseum", in reference to its construction by King "Ramses II".

King "Ramses II" ordered its construction in the thirteenth century BC, with a desire to show its greatness and position among kings, and it was dedicated to the worship of the god Amun. His fame can be traced back to his surrounding stores, in which a number of papyri were found, including the "Sinuha" papyrus.

The temple was similar in its architectural design to the Temple of Abu Simbel, but due to its exposure to a strong earthquake, its facade was destroyed, and its entrance was changed to be on the side overlooking the marina. The temple consists of the remains of Osiris roads and columns, and a huge edifice which half of it collapsed, in addition to important remains that the Egyptian-French archaeological mission headed by "Christian Laplan" was able to find, which include a group of public kitchens, butcher buildings, huge stores, and the school that was dedicated to educating children of Laborers. The temple contains huge statues of King Ramses II, surrounded on its three sides by corridors and storerooms, believed to have been used to store grain, clothing, leather, oil and wine pots. Its wall is decorated with pictures and inscriptions that monitor the nature of life in that period, and document the facts of the famous Battle of Kadesh, as well as the devotional scenes that represent Ramses II with various deities.