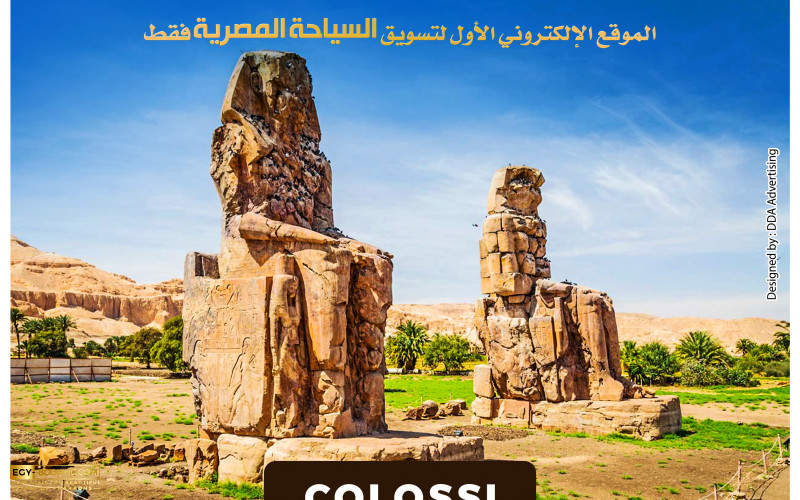 Luxor Governorate is famous for its special charm, with its archaeological sites that make you feel the greatness of Egypt's history. One of these monuments is known as the Colossi of Memnon, and they are located on the western mainland.

They were built by the architect, Pharaoh "Amenhotep ibn Habu" around the first century BC in 1350. They were made of blocks of quartzite sandstone, which were extracted from the Red Mountain, and each weighed 720 tons, and reached a height of 20 meters.

The two statues personify King "Amenhotep III" sitting on the throne, with his hands on his feet, and above him the royal crown, and to the right of his legs, we find a small statue of his wife, Queen Tiye, and to his left, a small statue of his mother, "Mut Um Weah". They were set in front of an ancient funerary temple, in memory of King "Amenhotep III" of the 18th dynasty, but as a result of the temple being used as a quarry during the 19th dynasty, only these two giant statues remain.

And for the name by which they were known, there is a legend that spread about this matter, as it is claimed that in 27 BC, an earthquake occurred, which resulted in the fall of the upper part of the northern statue, and some parts cracked, so that a sound similar to sad singing or whining was made whenever the wind passed Through him, the Greeks thought that this sound came from the crying of the mother of Memnon, the legendary Ethiopian hero, who was killed by Achilles, the Greek hero, in the Trojan War. Therefore, the Greeks named these two statues, after him, by the name Memnon. And soon this legend ended after repairing cracks and cracks in the two statues in 200 AD.