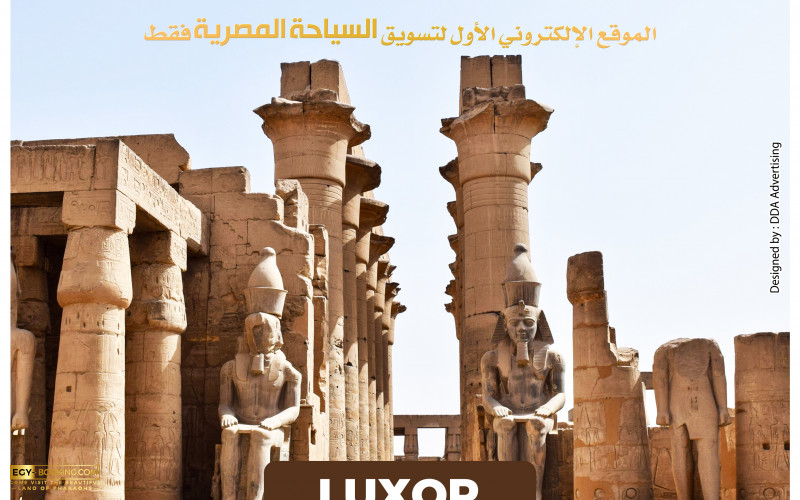 It was built in 1400 BC to be one of the most beautiful and luxurious Egyptian temples located on the eastern bank of the Nile in Luxor Governorate. It is listed under the World Heritage List due to its dazzling beauty and antiquity.

By our words, we mean the "Luxor Temple", which was built during the reign of the kings of the 18th and 19th dynasties in order to worship "Amun-Re", his wife "Mut", and her son "Khonsu", who are the deities also known as "The Theban Trinity".

For its history, we find that King "Amenhotep III" is credited with building the temple in its current form on one axis from north to south. Both Queen "Hatshepsut" and King Thutmose III" contributed to increasing the grandeur of this temple by constructing a small building consisting of three chapels dedicated to the Theban Trinity, which may have been rebuilt by King Ramses II. Also, there are the buildings Which were added by King "Amenhotep III", and King Ramses II, "the edifice and the two obelisks and the open courtyard". The purpose of constructing the edifice and the two obelisks was to depict the military achievements and their victories over the enemies in the Battle of Kadesh, but at a later time, the victories of the pharaohs were also recorded.

The temple has four halls containing 184 columns, the first with about 74 columns, the second is the Great Hall of Columns, with 14 columns, the third for celebrations, and includes 64 columns, and the fourth is the Transfiguration Hall, with 32 columns.

By researching the reasons behind its founding, it is believed that King “Amenhotep III” ordered its establishment for two reasons. The first is his desire to confirm his lineage to the god Amun himself, due to the lack of clarity of his entitlement to the throne according to Egyptian traditions, which stipulate that the pharaoh must be the son of Pharaoh and a princess of a pure dynasty Otherwise, he acquires his entitlement to the throne by marrying the eldest daughter of the previous king, and due to the lack of two conditions for Amenhotep III, he resorted to confirming his eligibility to the throne by proving his lineage to the god Amun himself, and recording his sacred birth on the walls of the famous room in the temple, known as the "birth room". The second lies in pleasing the priests of Amon to accept him as the legitimate pharaoh of Egypt.