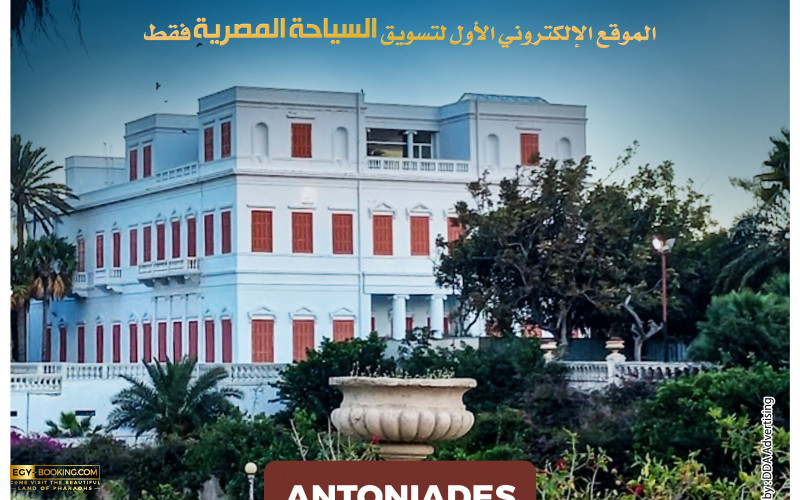 In the Bride of the Mediterranean, one of the most important, greatest and most beautiful historical palaces is settled. It is a palace that witnessed distinguished historical events and gardens, as well as many parties, also stays in it great kings and politicians, such as: Sultan Abdul Majeed, King Faisal, and others.

It is the "Gardens and Palace of Prince John Antoniades", which is settled on an area of about 50 acres. These gardens were within the suburb of "Ilozis", which witnessed important historical events for the Ptolemaic kings, and in the nineteenth century, it was owned by a wealthy Greek, and then owned by Muhammad Ali, who built a palace for him, followed by Khedive Ismail, until John Antoniades came In 1860, who asked French artist Paul Richard to develop the palace gardens to be a miniature copy of the Versailles Palace and its gardens, adding touches of different architectural styles, such as: Andalusian, Italian, Greek, and Roman. What distinguishes the palace and its gardens is the great hall covered with "mosaic", which resembles chipped marble, and a periodic crown of "plaster", in addition to a group of marble statues spread inside the palace and its gardens, representing a distinctive heritage of the history of Alexandria, the most famous of them: the statue of Aphrodite, "the symbol of beauty." , Erato "God of Poetry", statues of "Vaskodi Dama" and "Magellan", as well as a group of rare trees and natural flowers.

Among the most important historical events that the palace witnessed: the signing of the Anglo-Egyptian treaty in 1936 AD, the first preparatory meeting for the establishment of the Arab League in 1946 AD, and the beginning of the marriage of the Shah of Iran "Mohammed Reda Pahlavi" to Princess "Fawzia". For its gardens, it witnessed several concerts, including: "City Lights" concerts, which were revived by singing stars in the Arab world, such as: "Abdul Halim Hafez", Fayza Ahmed, and Shadia, as well as the "Alexandria World" festival, which was attended by 44 cities carrying Alexandria's name.