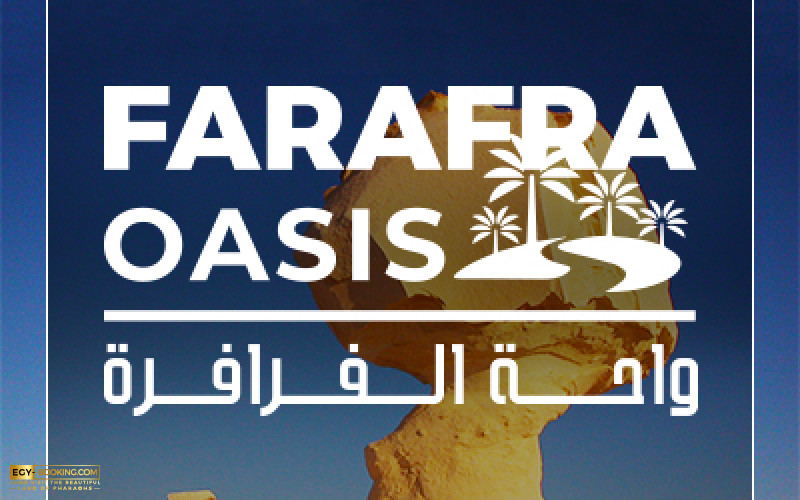 It may actually be just a small oasis in the Western Desert of Egypt, and despite that, it contains the most beautiful tourist and archaeological attractions that many from different parts of the world come to visit! It is the Farafra Oasis, located 170 km south of Bahariya Oasis, and 627 km from Cairo via the Cairo-Oasis Desert Road. Briefly, let us mention to you the most important tourist and archaeological landmarks in this oasis, the most important one is the "White Desert", which was declared a nature reserve in 2002. This desert includes wonderful sand formations that were formed by a sand storm several centuries ago, which turned the sand into a white clay paste, resulting in these strangely shaped sand formations, perhaps the most prominent one is what is known as the huge chalk rock. In addition, it contains invertebrate fossils, petrified trees such as acacia trees, and bright white limestones. Therefore it was considered as an open museum to study the desert environment, geography, fossils and fascinating wildlife.

There is also Al-Jara Cave, which is located in the heart of the Western Desert, between Bahariya Oasis, and Assiut Governorate in the middle of the Farafra Desert near Wadi Muharraq, after the White Desert Protectorate, about 7 km east towards Assiut. It is a cave in the ground, and is characterized by what is known geologically as "stalactites and stalactites sediments", and it was discovered by the German "Gerhard Rolfes" in 1873 AD.

It also includes wells and eyes, including: the magical "cypress spring", which is a natural spring of water that remains dry until any living creature approaches it, whether a human, animal, or even a bird, and then it begins to gradually dry out until it disappears completely! There is a well "Sita", which is located six kilometers to the west of the city of Farafra, and its water temperature reaches 42 degrees Celsius throughout the year.

And for the archaeological sites in which they are located, there are remains of the "Palace of Farafra", located on the western side of the city of Farafra. This palace dates back to the Roman era, and was considered a bank for keeping money and a silo for storing grain, where the farmers, after the completion of the harvest season and the extraction of grain, took the initiative to store and preserve food inside the palace in exchange for money granted to the guards of the region, with the aim of overcoming theft and looting, besides Some residents save money.