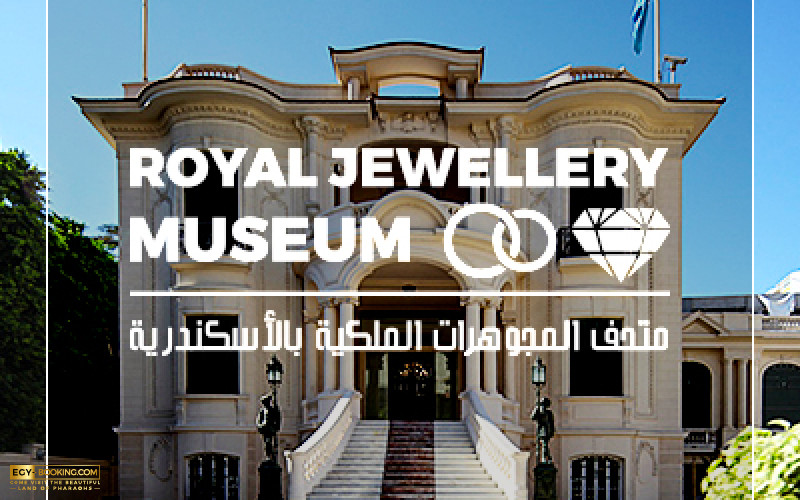 Royalty jewelry museum is located on the Zizinia district of Alexandria. The museum building was initially a palace for Fatima al-Zahra, one of the nobles of the Alawite royal family that ruled Egypt from 1805 until the July Revolution 1952.

And on the year of 1986 the palace turned into a museum that contains 11500 pieces of royalty jewelry and rare artifacts of the Upper Family, which is displayed in 10 halls inside the museum.

Architecturally the museum is designed according to the European style, and it features two suites: an Eastern and a western suit, connecting them to a very beautiful lobby. For the Eastern suit, it is a two-halls a hall topped with a bronze boy statue with a painted stained-glass panel decorated with bullets, which are naturally decorated. For the West Wing, it consists of two floors, each with four halls. And The windows of the palace are decorated with stained glass paintings.

Thus, the reference to the museum's collections remains, as there are belongings of Prince Mohammed Ali Tawfiq, and others dating back to the Khedive Era Saeed Pasha, where we find a collection of scarfs and gold watches, Egyptian, Turkish and foreign necklaces painted with jewelry and pure gold, as well as the 4,000 Coptic, Roman, Persian and Byzantine artifacts. One of the museum's most beautiful collections is The Golden Diamond-Plated Box of Muhammad Ali. It also has its own chess and a steel-shaped honoring sword in the form of a snake's head. We also find property belonging to King Farouk, which has been characterized by the frequent use of diamonds. All of this is crowded with artifact gifted from the heads of some European countries. Among them is the famous Eugenie tray, which was given to Khedive Ismail at the opening of the Suez Canal, and is estimated to cost more than 15 million pounds. The garnet dish, contained in King Farouk's collection, is a rare historical masterpiece that tells part of the history of Tsarist Russia. Also, a coffee crew weighing about 25 kilos of silver, which was the gift of the World Channel Company of the Governor Mohammed Saeed Pasha, and other valuables that the museum takes pride in.