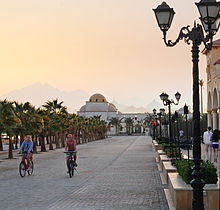 The Sahl Hasheesh Bay is home to a number of islands and coral reefs with diving and snorkeling. The nearby Abu Hasheesh Island is a local protectorate containing a thriving community of marine life.[3]

Development rights to Sahl Hasheesh are held by Egyptian Resorts Company (ERC), who purchased the land in 1995. ERC itself was founded in 1995 and publicly listed in 1999. ERC had a vision of a huge project for this area. Plans for the 12-square mile community were to be completed by 2020.[4] The builder's stated objective was "to create a fully integrated mixed-use resort city, with the aim of achieving long-term economic and environmental sustainability."[5]

In the resort town, tourists and residents can find something of a treasure, a partly submerged artificial city. This artificial reef attracts fish and is a favorite with tourists, for diving and snorkeling.[8][5]

In 2009, Oberoi Sahl Hasheesh was rated as one of the more upscale resorts in the Middle East and won first place in Trip Advisors 2016 Travelers Choice Award of top 25 Luxury Hotels in Egypt.[9][10] Other hotels at the resort were in the top 10 of Hurgada hotels, as well.[11]

In 2015, Bloomberg Financial reported that the developer was struggling to sell its properties and had lost a lot of value in its stock.[1] But in 2016, the developer had a strong financial balance sheet and its hotels were being highly rated by tourists from around the world.[7] In 2016, tourism was returning to pre-revolution levels.[12]

Another developer, Inertia Holdings had projects in Sahl Hasheesh as of 2018.[13]Jump to navigationJump to search