Nubia (/ˈnuːbiə, ˈnjuː-/) is a region along the Nile river encompassing the area between Aswan in southern Egypt and Khartoum in central Sudan. It was the seat of one of the earliest civilizations of ancient Africa, with a history that can be traced from at least 2500 BC onward with the Kerma culture. The latter was conquered by the New Kingdom of Egypt under pharaoh Thutmose I around 1500 BC. Nubia was home to several empires, most prominently the kingdom of Kush, which conquered Egypt during the 8th century BC during the reign of Piye and ruled the country as its Twenty-fifth Dynasty (to be replaced a century later by the native Egyptian Twenty-sixth Dynasty).

The collapse of Kush in the 4th century AD after more than a thousand years of existence was precipitated by an invasion by Ethiopia's Kingdom of Aksum and saw the rise of three Christian kingdoms, Nobatia, Makuria and Alodia, the last two again lasting for roughly a millennium. Their eventual decline initiated not only the partition of Nubia into the northern half conquered by the Ottomans and the southern half by the Sennar sultanate in the 16th century, but also a rapid Islamization and partial Arabization of the Nubian people. Nubia was again united with the Khedivate of Egypt in the 19th century. Today, the region of Nubia is split between Egypt and Sudan.

The name Nubia is derived from that of the Noba people, nomads who settled the area in the 4th century CE following the collapse of the kingdom of Meroë. The Noba spoke a Nilo-Saharan language, ancestral to Old Nubian. Old Nubian was mostly used in religious texts dating from the 8th and 15th centuries. Before the 4th century, and throughout classical antiquity, Nubia was known as Kush, or, in Classical Greek usage, included under the name Ethiopia(Aithiopia).

Historically, the people of Nubia spoke at least two varieties of the Nubian language group, a subfamily that includes Nobiin (the descendant of Old Nubian), Kenuzi-Dongola, Midob and several related varieties in the northern part of the Nuba Mountains in South Kordofan. Until at least 1970, the Birgid language was spoken north of Nyala in Darfur, but is now extinct. However, linguistic evidence indicates that the languages spoken in the ancient Kerma Culture (present-day southern Egypt and northern Sudan) in Nubia, belonged to the Cushitic branch of the Afroasiatic languages.[1][2]

Early settlements sprouted in both Upper and Lower Nubia. Egyptians referred to Nubia as "Ta-Seti," or "The Land of the Bow," since the Nubians were known to be expert archers.[4] Modern scholars typically refer to the people from this area as the "A-Group" culture. Fertile farmland just south of the Third Cataract is known as the "pre-Kerma" culture in Upper Nubia, as they are the ancestors.

The Neolithic people in the Nile Valley likely came from Sudan, as well as the Sahara, and there was shared culture with the two areas and with that of Egypt during this period.[5] By the 5th millennium BC, the people who inhabited what is now called Nubia participated in the Neolithic revolution. Saharan rock reliefs depict scenes that have been thought to be suggestive of a cattle cult, typical of those seen throughout parts of Eastern Africa and the Nile Valley even to this day.[6] Megaliths discovered at Nabta Playa are early examples of what seems to be one of the world's first astronomical devices, predating Stonehenge by almost 2,000 years.[7] This complexity as observed at Nabta Playa, and as expressed by different levels of authority within the society there, likely formed the basis for the structure of both the Neolithic society at Nabta and the Old Kingdom of Egypt.[8] Around 3500 BC, the second "Nubian" culture, termed the A-Group, arose.[9] It was a contemporary of, and ethnically and culturally very similar to, the polities in predynastic Naqada of Upper Egypt.[10][11] The A-Group people were engaged in trade with the Egyptians. This trade is testified archaeologically by large amounts of Egyptian commodities deposited in the graves of the A-Group people. The imports consisted of gold objects, copper tools, faience amulets and beads, seals, slate palettes, stone vessels, and a variety of pots.[12] 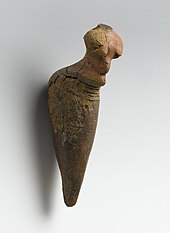 Around 3300 BC, there is evidence of a unified kingdom, as shown by the finds at Qustul, that maintained substantial interactions (both cultural and genetic) with the culture of Naqadan Upper Egypt. The Nubian culture may have even contributed to the unification of the Nile Valley.

Toby Wilkinson, based on work by Bruce Williams in the 1980s, wrote that "The white crown, associated in historic times with Upper Egypt, is first attested later than the red crown, but is directly associated with the ruler somewhat earlier. The earliest known depiction of the white crown is on a ceremonial incense burner from Cemetery at Qustul in Lower Nubia".[13] Based on a 1998 excavation report, Jane Roy has written that "At the time of Williams' argument, the Qustul cemetery and the 'royal' iconography found there was dated to the Naqada IIIA period, thus antedating royal cemeteries in Egypt of the Naqada IIIB phase. New evidence from Abydos, however, particularly the excavation of Cemetery U and the tome U-j, dating to Naqada IIIA has shown that this iconography appears earlier in Egypt."[14]

Around the turn of the protodynastic period, Naqada, in its bid to conquer and unify the whole Nile Valley, seems to have conquered Ta-Seti (the kingdom where Qustul was located) and harmonized it with the Egyptian state. Thus, Nubia became the first nome of Upper Egypt. At the time of the first dynasty, the A-Group area seems to have been entirely depopulated,[4] most likely due to immigration to areas west and south.

This culture began to decline in the early 28th century BC. George Reisner suggested that it was succeeded by a culture that he called the "B-Group", but most archaeologists today believe that this culture never existed and that the area was depopulated from c. 3000 BC to c. 2500, when a-group descendants returned to the area.[15][16] The causes of this are uncertain, but it was perhaps caused by Egyptian invasions and pillaging that began at this time. Nubia is believed to have served as a trade corridor between Egypt and tropical Africa long before 3100 BC. Egyptian craftsmen of the period used ivory and ebony wood from tropical Africa which came through Nubia.

In 2300 BC, Nubia was first mentioned in Old Kingdom Egyptian accounts of trade missions. From Aswan, right above the First Cataract, the southern limit of Egyptian control at the time, Egyptians imported gold, incense, ebony, copper, ivory, and exotic animals from tropical Africa through Nubia. As trade between Egypt and Nubia increased, so did wealth and stability. By the Egyptian 6th dynasty, Nubia was divided into a series of small kingdoms. There is debate over whether these C-Group peoples,[17] who flourished from c. 2500 BC to c. 1500 BC, were another internal evolution or invaders. There are definite similarities between the pottery of the A-Group and C-Group, so it may be a return of the ousted Group-As, or an internal revival of lost arts. At this time, the Sahara Desert was becoming too arid to support human beings, and it is possible that there was a sudden influx of Saharan nomads. C-Group pottery is characterized by all-over incised geometric lines with white infill and impressed imitations of basketry.

During the Egyptian Middle Kingdom (c. 2040–1640 BC), Egypt began expanding into Nubia to gain more control over the trade routes in Northern Nubia and direct access to trade with Southern Nubia. They erected a chain of forts down the Nile below the Second Cataract. These garrisons seemed to have peaceful relations with the local Nubian people, but little interaction during the period.[18] A contemporaneous but distinct culture from the C-Group was the Pan Grave culture, so called because of their shallow graves. The Pan Graves are associated with the East bank of the Nile, but the Pan Graves and C-Group definitely interacted. Their pottery is characterized by incised lines of a more limited character than those of the C-Group, generally having interspersed undecorated spaces within the geometric schemes.