Articles Recent News A new archaeological discovery in the Saqqara 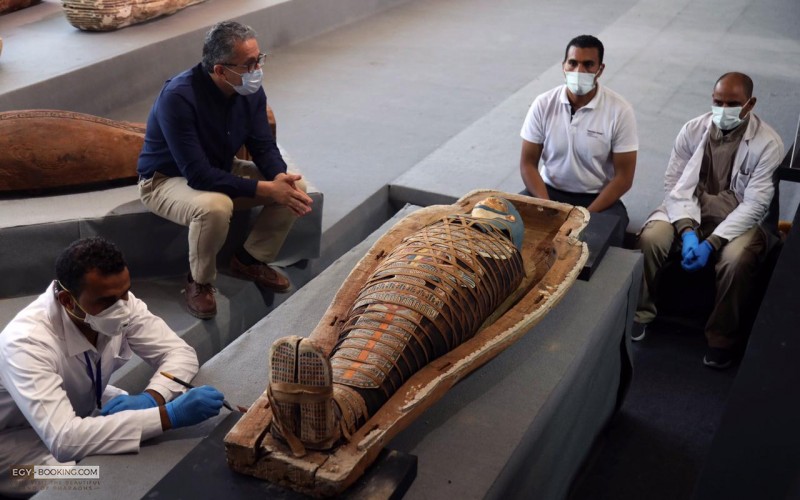 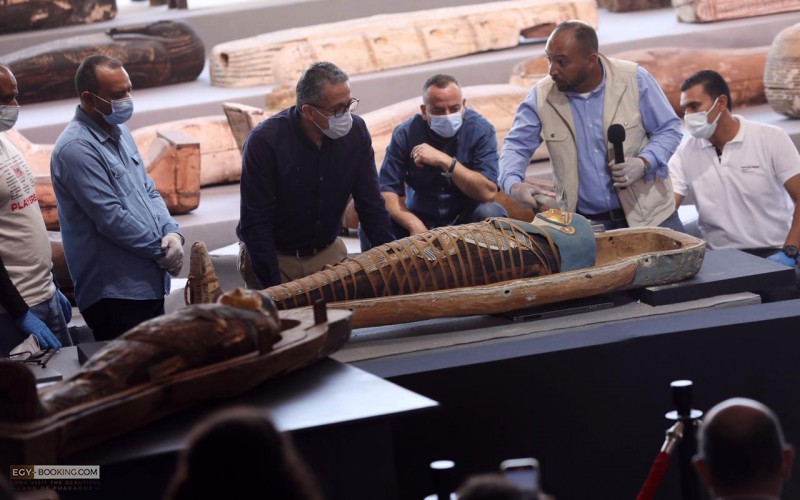 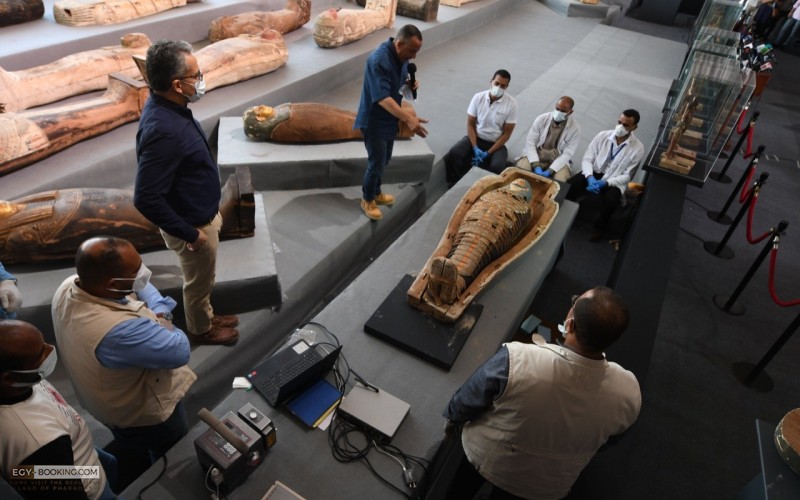 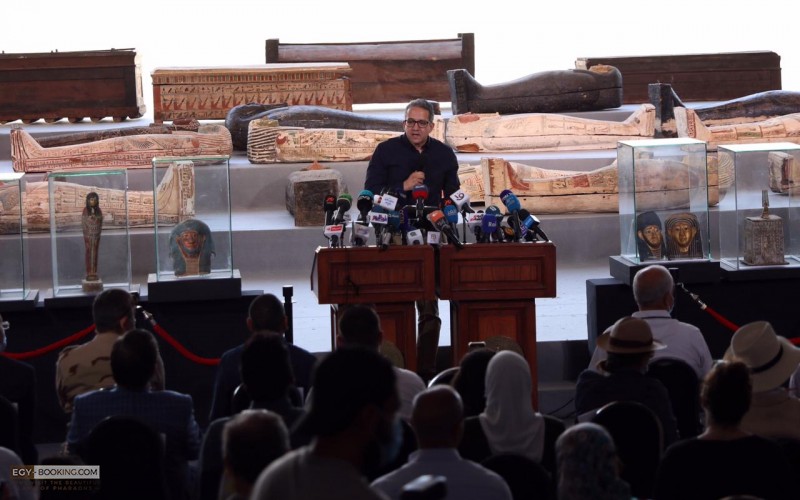 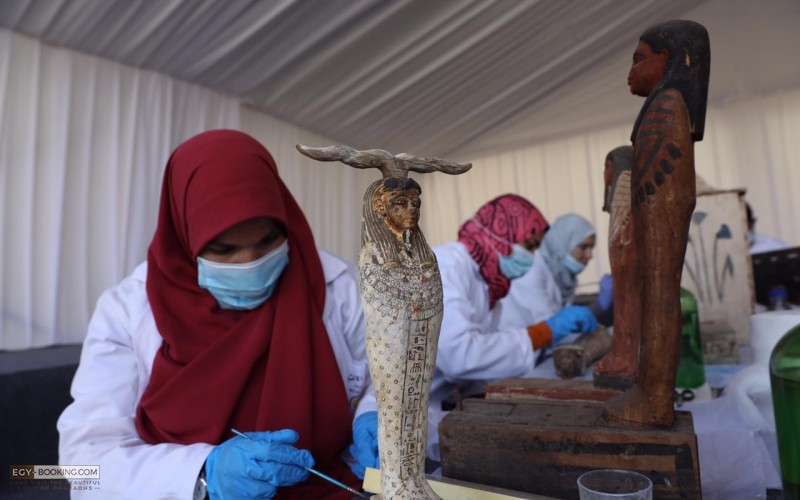 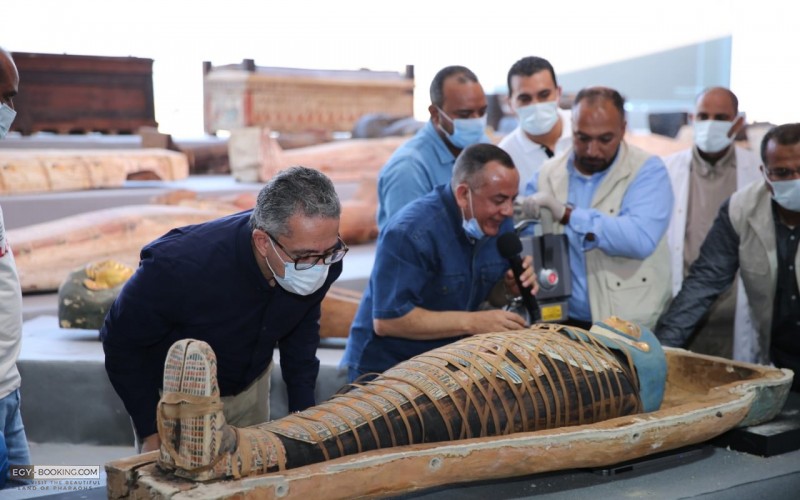 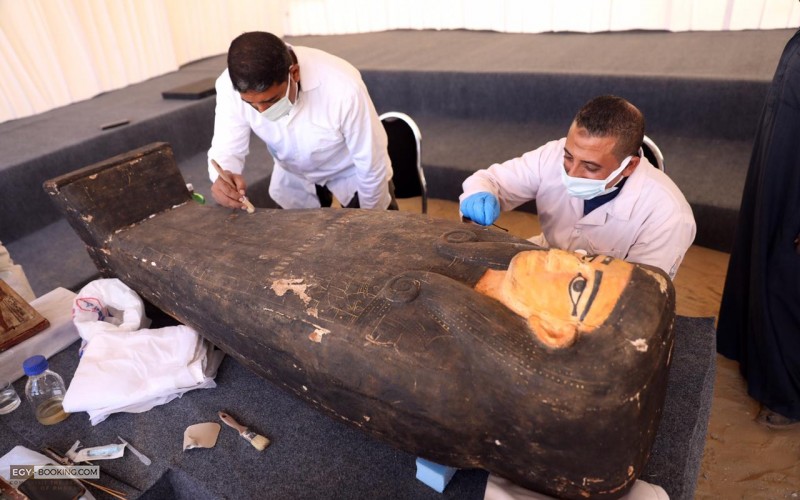 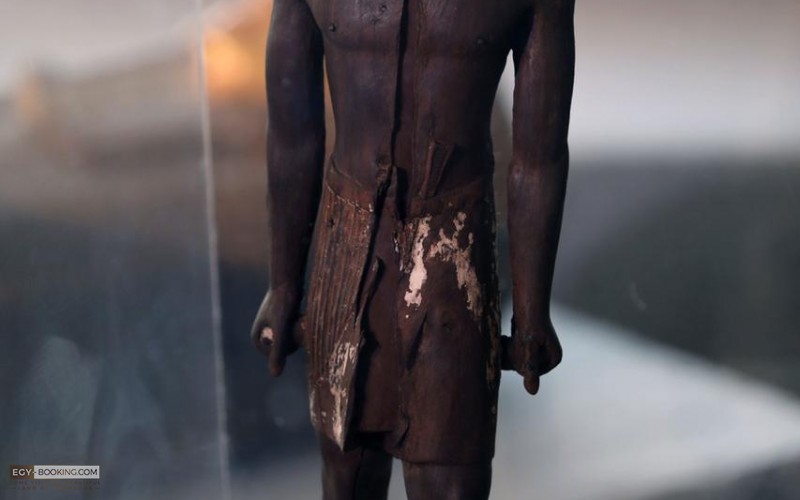 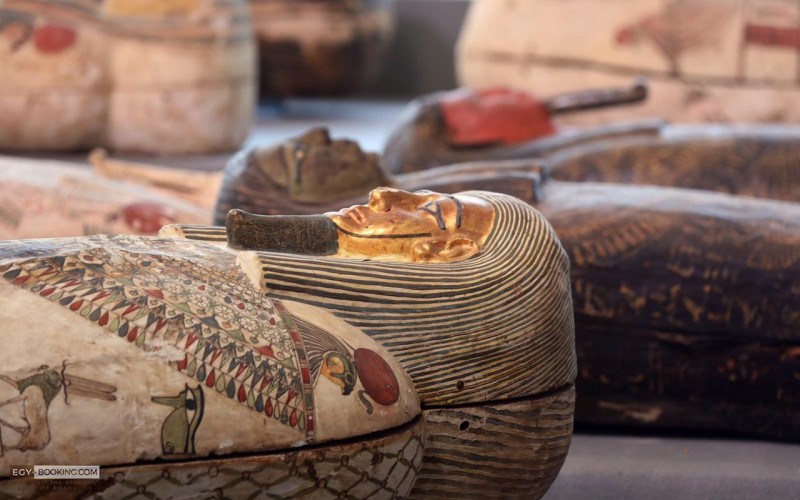 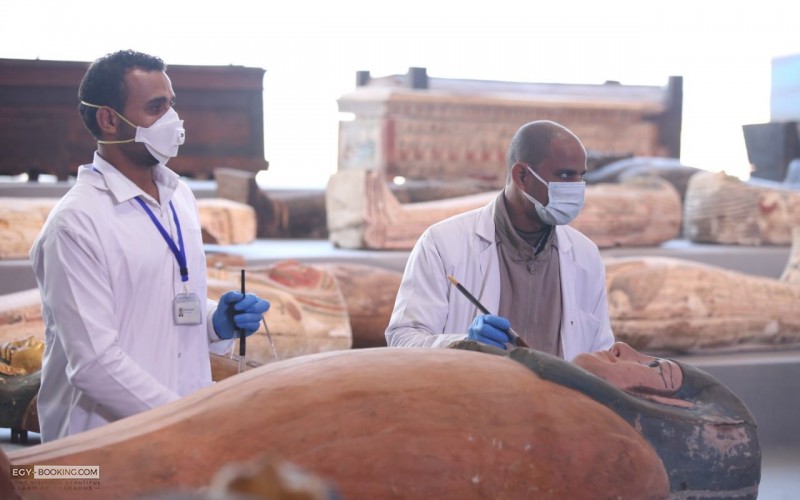 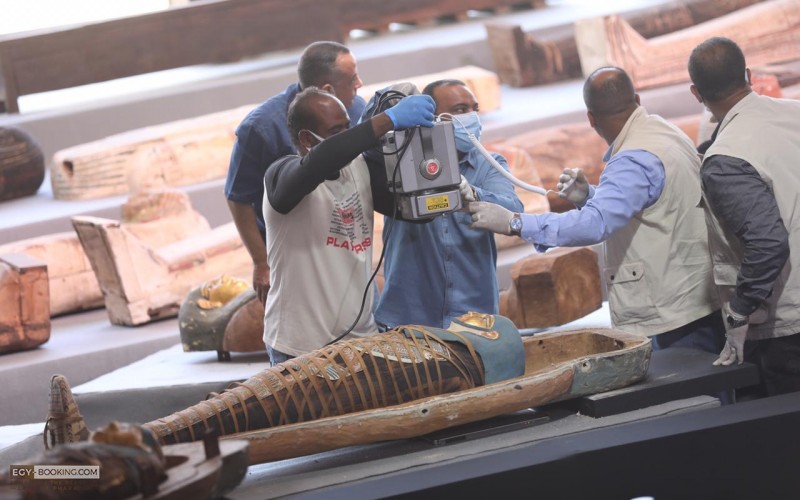 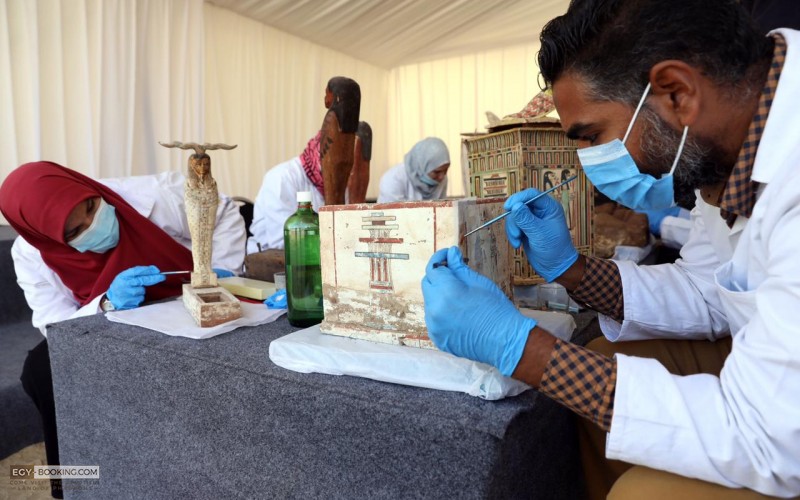 - 100 wooden coffins sealed in their initial condition inside burial wells
- 40 statues of the god of the Saqqara necropolis, Ptah Sukkar with gilded parts and 20 wooden boxes of the god Horus
The Egyptian archaeological mission working in the Saqqara antiquities area found a new archaeological discovery, as a continuation of the excavation work in the area that began last August.

Where the mission found 59 colored coffins and sealed on the human body inside mummies in a good condition of preservation.
Today, the Ministry of Tourism and Antiquities announced, amid extensive media coverage at the Saqqara Cemetery, the discovery of another number of coffins in three burial wells, ranging in depth from 10 to 12 meters below the surface of the earth, in addition to a large number of archaeological finds.

The mission uncovered 100 closed wooden coffins in their initial condition and 40 statues of the god of Saqqara, Ptah Sukkar, including statues with gilded parts and 20 wooden boxes of the god Horus, and two statues of a person called "Phnomus", one of which is 120 cm high, and the other is 75 cm high made of acacia wood. Acacia, in addition to the unveiling of a number of shawabti statues and amulets, and 4 masks of gilded cartoons.

The announcement was attended by Major General Ahmed Rashid, Governor of Giza, Ambassador Badr Abdel Aty, Assistant Minister of Foreign Affairs for European Affairs, Dr. Mustafa Waziri, Secretary General of the Supreme Council of Antiquities, Major General Atef Moftah, Supervisor of the Grand Egyptian Museum and the surrounding area, and Dr. Ahmed Ghoneim, CEO of the National Museum of Civilization. Dr. Al-Tayeb Abbas, assistant minister for archaeological affairs at the Grand Egyptian Museum, and a number of ministry leaders, in addition to some Egyptian public figures and artists.

Approximately 36 foreign, Arab and African ambassadors in Cairo and their families, as well as a large number of local and foreign news agencies, newspapers and television channels attended.
Dr. Khaled Al-Anani, Minister of Tourism and Antiquities, began his speech during the announcement of the discovery by welcoming the attendees, noting that this is the third year in which an archaeological discovery is announced in Saqqara.

The Minister also talked about the Saqqara region, noting that it is one of the most important parts of the Memphis cemetery, which is the first capital of Egypt, which extends from Abu Rawash in the north to Dahshur in the south, pointing out that the Memphis of Memphis is one of the parts of Egypt's sites registered on the UNESCO World Heritage List.

He pointed out that Saqqara is a very large area with about 13 pyramids, and kings were buried there from the ancient era, and citizens and senior officials were also buried there from the beginning of the families through all the eras of ancient Egyptian history (Pharaonic, Greek and Roman), and it also has a number of ancient monasteries. , And the largest animal cemetery.

He added that Saqqara is considered a very rich area that is still full of much that will be revealed to the world, pointing out that it is expected, with the continued work on it, to find human and animal graves in all its parts at any time period.
The minister explained that this new discovery was found at the same point as the previous discoveries, pointing out that today is a continuation of the last discovery that was announced last October, indicating that today is not the end of the disclosure and that the work will not end yet, and the completion of the examination will be announced during the period. Coming.

The minister explained that, in response to some questions, not to wait for the full disclosure of the discovery after its completion, as there was a need to extract the coffins that were discovered to provide a space to complete the exploration of the new wells behind them.
The minister reviewed the details of the new archaeological discovery, as more than 100 closed coffins from the Late and Ptolemaic period were found, more than 40 statues of deities and funeral holdings, including the sect, in addition to the 59 coffins that were announced last October and which were transferred to the Grand Egyptian Museum. And that in three wells in the sacred animal area.

The minister emphasized that the Egyptian Museum will succeed in editing and will continue and compete with all museums of the republic, pointing out also that the opening of the Capital Museum, a "museum on the capitals of Egypt", will be the first official opening in the City of Culture and Arts in the new administrative capital.
The minister explained that all the archaeological discoveries that were announced during the last period are nothing but a blessing from God, and the result of providing the Egyptians with the opportunity to work in excavation work more, expressing his pride in the presence of partners from all countries of the world who have been working in excavation works for decades.

He pointed out that the discovery today was not the last discovery in 2020, pointing out that Dr. Zahi Hawass had informed him a few days ago that a new archaeological discovery was found elsewhere in the Saqqara region, but it takes a few weeks to announce it, expected to be announced at the end of December or the beginning of 2021 .
He pointed out that the year 2020 will not end before the expected opening of the Central Hall and the Mummies Hall in the National Museum of Egyptian Civilization, which will be accompanied by a great convoy to transport royal mummies from the Egyptian Museum in Tahrir to there.

The minister emphasized that the tourism and antiquities sector enjoys unprecedented support from the political leadership, as His Excellency the President inaugurated three museums of Egyptian antiquities in three governorates in one minute in late October.
The minister concluded his speech by offering sincere thanks to all his colleagues working at the Ministry of Tourism and Antiquities, and the Supreme Council of Antiquities headed by Dr. Mustafa Waziri, Secretary-General of the Council, for this archaeological discovery, especially for their work in difficult and arduous circumstances, and especially thanks to archaeologists, restorers, Al-Ghafra and others.
He also thanked the National Bank of Egypt for its sponsorship of this event.

During the announcement of the archaeological discovery, a coffin was opened with a mummy inside, and X-Ray was made for this mummy, and a short film about the archaeological discovery was shown.
For his part, Dr. Mustafa Waziri, Secretary General of the Supreme Council of Antiquities, explained that this mummy, for which the X-Ray was made, it became clear that its owner was in good health during his life and that he died at the age of between 40 and 45 years and that his length ranges between 165 and 165 175 cm.

For his part, Hisham Okasha, Chairman of the Board of Directors of the National Bank of Egypt, expressed his pride in the continuation of the strategic partnership with the Ministry of Tourism and Antiquities, and to participate in these successive archaeological discoveries, as the bank previously sponsored the announcement of the discovery that took place last month in the heart of the Saqqara region as well, which achieved a positive impact and redirected attention to The ancient Egyptian civilization, which is a participation that reflects the Bank's constant desire to continue its role in the scientific and cultural movement in Egypt, Especially with regard to the monuments of Egypt that document the human history in the world, adding that the Ahl Masr Bank does not spare any of its material, human or technical capabilities in supporting culture, especially those that positively affect the activity of the tourism industry in Egypt and the subsequent payment of the return from that industry Important matters affecting the national economy and the lives of thousands of its workers.

Nermin Shihab El-Din, Head of Marketing and Community Development at the National Bank of Egypt, indicated that the bank's role is extended in supporting the cultural movement, as it had previously sponsored the announcement of the previous stage of the Saqqara area discoveries, in addition to sponsoring projects to develop some sites and monuments in cooperation with the Ministry of Tourism and Antiquities in both The Giza pyramids area, the Karnak temple in Luxor, the Philae Temple and the Abu Simbel temple in Aswan, in an effort by the bank to maintain the position that these most famous landmarks deserve in the world, which reflects the bank's belief in the importance of implementing sustainable development standards and comes within the framework of its multiple contributions in various areas of social responsibility.

It is worth noting that the area in which this discovery was found is the "cemetery of senior statesmen" in Saqqara, in which the sacred cemetery of cats, animals and birds was found, as well as the great discovery of the tomb of "Wahti", a priest of the beautiful Fifth Dynasty, which was praised by the whole world.