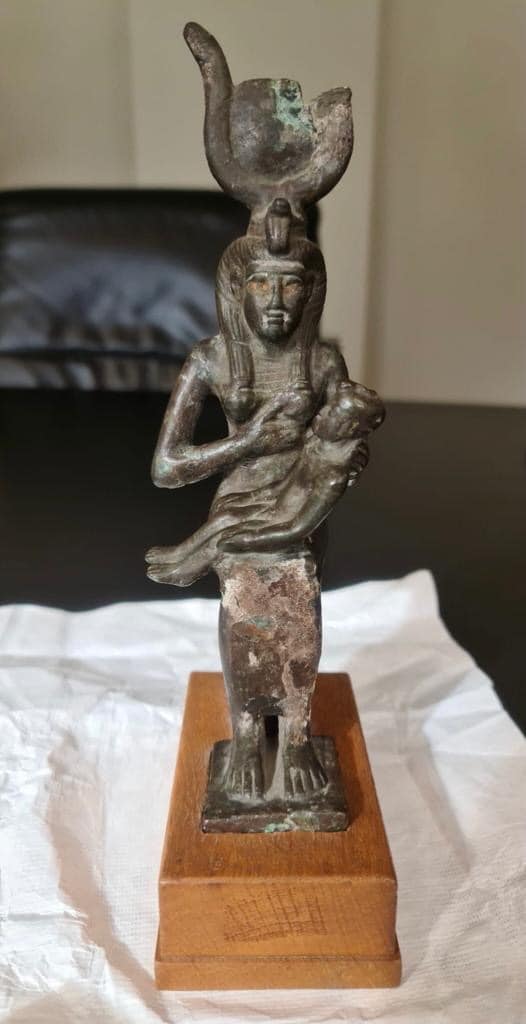 The efforts of the Ministry of Tourism and Antiquities, in cooperation with the Egyptian Ministry of Foreign Affairs, succeeded in recovering a late-era bronze statue of the goddess Isis in a sitting position, carrying on her lap the baby Horus, who was illegally left the country.
The recovery of this statue comes within the framework of the fruitful and continuous cooperation between the Ministry of Tourism and Antiquities represented by the General Administration of Recovered Antiquities, the Office of the Assistant Minister of Foreign Affairs for Cultural Relations and the Egyptian Embassy in Bern, Switzerland.
The events of this case date back to November 2018, when the Swiss customs authorities discovered the statue while carrying out a routine inspection, and the Ministry of Tourism and Antiquities took all necessary measures to recover the statue, after confirming its antiquity by a committee from the Ministry of Tourism and Antiquities, which recognized that the statue is an archaeological belonging to the Egyptian civilization. It is the result of surreptitious excavation and that he got out of Egypt illegally, and then coordination was made with the Swiss authorities, especially the Swiss Federal Office for Cultural Affairs, within the framework of the agreement signed between the Egyptian government and the Swiss Federal Council in the field of recovering smuggled antiquities.
Today, Ambassador Wael Gad, Ambassador of the Arab Republic of Egypt in Bern, Switzerland, received the artifact and deposited it at the headquarters of the Egyptian Embassy in preparation for its return to Egypt as soon as possible.